Board of Education Spotlight


The Board of Education honored Baldwinsville students who graduated from OCM BOCES programs in June: 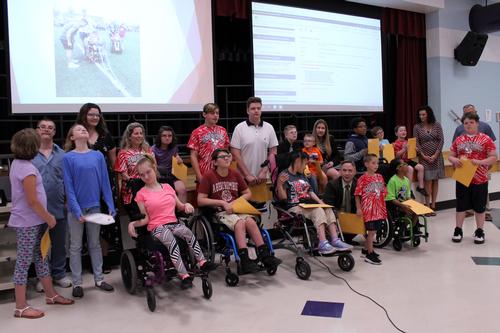 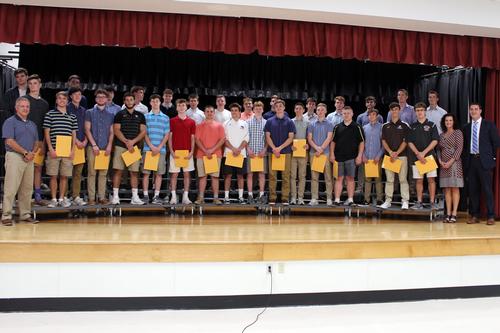 Girls Varsity Lacrosse – Coach Megan Collins
The girls varsity lacrosse team is the Section III Class A champion and the Class A regional champion, and earned 2nd place in the state championships. 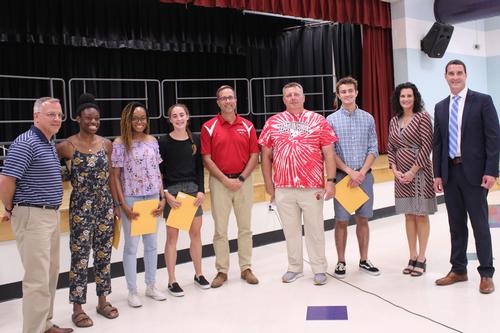 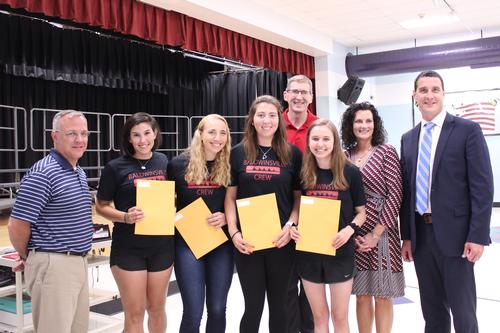 Seal of Biliteracy -Ten Baker High School students have earned the NYS Seal of Biliteracy. In order to earn the seal students must demonstrate proficiency in a second language. In May, our students were required to defend their portfolios in front of a panel of evaluators at OCM BOCES. Successful candidates will have the Seal of Biliteracy affixed to their diplomas upon graduation. These students are:
Maura Bartell
Owen Bauer
Elizabeth Mautz
Cooper Pyle
MacKenzie Randolph
Iham Rodriguez
Abigail Scherfling
Mitchell Stables
Jason Steiger
Stephanie Stroup 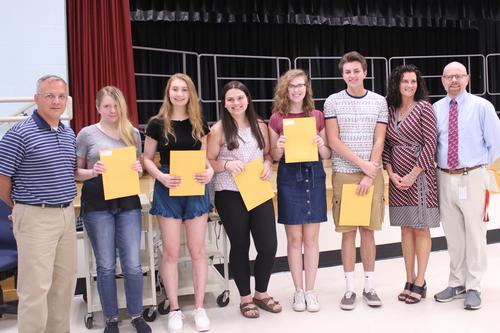 Artwork on Exhibit at Everson Museum

There are two students who currently have their Silver Key artwork on exhibit at the Everson Museum in Syracuse.

Samantha Lucas of Baker High School – has her award-winning painting on display. Her teacher is Robyn Debottis.

Troy Volcko of Durgee Jr. High Schol -  has his award-winning photograph on display. His teacher is Wendy Robinson.

The Baldwinsville Kiwanis Club presented the Board with a donation of $3,500 for the district, to be used for the Get Ready for Kindergarten program.

The Board of Education honored two students and a teacher for their achievements.

The Board of Education honored district students who earned perfect scores on June 2017 Regents exams:

The Board of Education honored seven students who graduated from programs at OCM BOCES on June 8, 2017. They are: 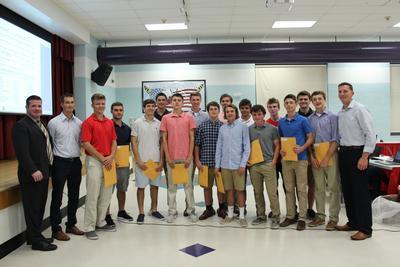 The Board of Education honored several students and staff members for their achievements.

Ivan Yumagulov
Ivan Yumagulov, a senior at Baker High School, is the recipient of the prestigious Robinson Award of the Skaneateles Festival. The award is presented annually to an outstanding high school student from Central New York. Ivan is an outstanding pianist with a long list of accomplishments and awards.

Karen Caswell – She received a gold medal in the Teach & Train category.

Leah Kramer – She received a silver medal in the Interpersonal Communications category. 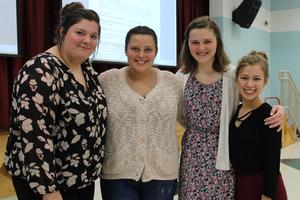 May 22, 2017
The Board of Education honored members of the Baker High School B.E.E.S. robotics team for being named the Northern New York State Champion in the Northern New York State VEX Robotics Competition held at the SRC Arena in February 2017. The team advanced to the VEX World Championship, held in Kentucky in April. Hundreds of robotics teams from around the world participated in the competition. The B.E.E.S. team ranked #118 in the world in the skills competition!
The team is advised by Matthew Hudson, a technology teacher at Baker High School and Rebecca Crossley, a technology teacher at Durgee Junior High School.

The Board also recognized recognize several individuals, organizations, and companies for their financial support of the team’s trip to Kentucky for the world competition. Thank you to: 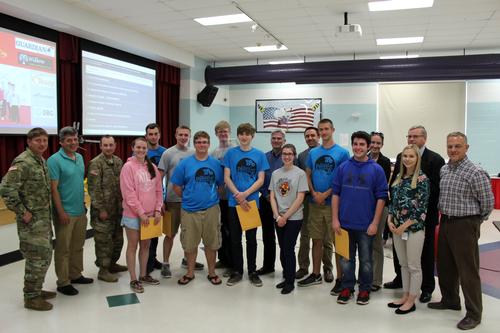 May 8, 2017
The Board of Education honored members of the District's teaching staff who received tenure this year. Congratulations to the following:
April 24, 2017
The Board honored 52 who received awards in the Northeast region of the 2017 Scholastic Writing Awards competition. The competition was open to students in grades 7-12.

The District had a Gold Key winner in the national portion of the competition.

Aurelia Tice - a Durgee eighth-grader, was recently informed that she has won a Gold Key in the 2017 National Scholastic Art and Writing Awards Competition! She has been invited to New York City to receive her award in June.
April 3, 2017

The Board of Education honored winter athletes and teams that competed in state competition, District winners in the SkillsUSA regional competition, and science teacher Jill Gravante. 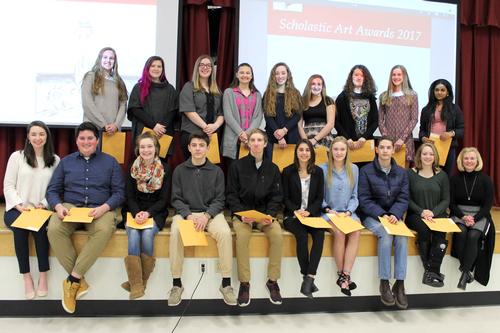 The Board of Education honored 32 students from Baker High School and Durgee Junior High School who won awards in the 2017 CNY Scholastic Art Competition.

The Baldwinsville Pep Band performed for the Board of Education at its February 6, 2017 meeting.
At the January 23, 2017 Board of Education meeting, the Board honored students who were selected to attend and perform at the NYS All-State Music Conference December 1 – 4, 2016 in Rochester. Students were selected through a rigorous audition process to be a part of this prestigious music conference.

Girls Swimming: Noelle Staso competed in the NYSPHSAA girls swimming championships in the 50 meter freestyle, finishing in 40th place and she finished in 31st place in the 100 meter breast stroke.

Girls Cross Country: Justus Holden-Betts competed in the NYSPHSAA girls cross country championships, finishing in 32nd place. She was part of the Section III team that won the championship.

Field Hockey: The field hockey team had an amazing year. The team is the Section III Champion, the Regional Champion and a state semi-finalist. The team is coached by Tessa Ordway. Team members are:

Kathy Morse, coach of the girls varsity soccer team, won her 200th game as coach on September 29, 2016 against Liverpool.

The December 5, 2016 Board of Education meeting featured a musical performance by the Ray cello chamber ensemble directed by music teacher Jennifer Bearup. Members of the ensemble are:

At the same meeting, several students and a staff member were honored for their achievements.

The award recognizes excellence in the provision of school psychological services and is presented by local chapters of NYASP to individuals who spend the majority of their time (75%) providing direct services to children and their families. Chapter E includes school districts in the counties of Onondaga, Oneida, Cortland, Oswego, Madison and Cayuga.
At the November 7, 2016 Board of Education meeting, the Marching Bees performed their show, The Grid.


In July 2016, the Baldwinsville Marching Band, in conjunction with Assemblyman William Magnarelli, Time Warner Cable, and Sunnking Electronics Recycling, held an electronics fundraising event on the district’s main campus. At the Board's November 7 meeting, Assemblyman William Magnarelli presented the Baldwinsville Marching Band with a check in the amount of $1,003.56 in appreciation of the Marching Band’s hardworking commitment and outstanding participation efforts in this successful, worthwhile community event. 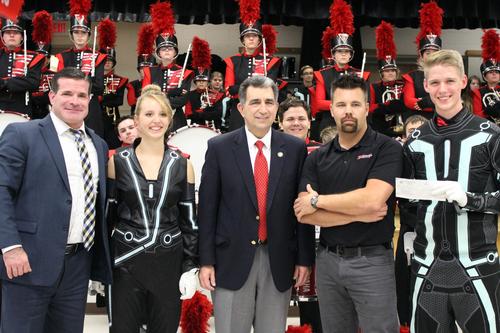 At its meeting on September 9, the Board of Education honored students from Durgee Junior High School and Baker High School who earned 100% on a Regents exam in June 2016. The following students were honored:

"Achieving Our Full Potential Together"
Developed by CNYRIC